Jesus Christ Monkey Car (JCMC) was created in 2003 and disassembled in 2016. I took nearly 140 images of the car in 2013, put them away, and rediscovered the images in 2018. This submission consists of details of JCMC that I find intriguing.

I view JCMC from several perspectives. First, as a child, I was fascinated by stained glass images of Jesus Christ. This fascination extended into my adulthood and was expanded in college- where I was briefly exposed to the role of Christian imagery in Western Art. Second, I have been interested in Surrealism most of my adult life. JCMC seems to, at the very least, have surrealistic elements. Finally, the contents of the of bumper stickers on the back of JCMC in the last image reflect many of the same thoughts I have experienced during my religious journey.

Because some may find the images offensive, it is important to point out I was raised a Christian and confirmed. I attended Bible Study classes and engaged in more formal forms of Christian education during parts of my adulthood. Based on these experiences, I find there is no conflict between Christianity, as I understand it, and evolution. My personal perspective is further shaped by the mystery of religious experience more than the dogma of organized religion.

There is a Facebook page dedicated to Jesus Christ Monkey Car. Information about the car from the car’s creator can be found in the “about section.” 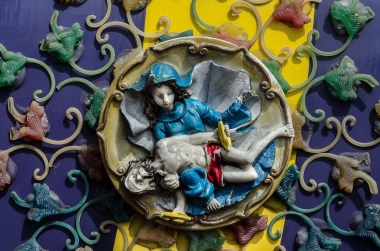 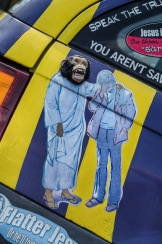